Q. On slide 23 (zonula adherens) it is mentioned that actin filaments insert into attachment plaques. And then I believe on slide 19 you say in the lecture that the purple-ish ridges within the zonula adherens are the attachment plaques. Would that make the microfilament labelled on 19 the actin filaments mentioned in 23? In other words, are the terms interchangeable or are they different filaments?

A. The short answer is yes: actin filaments are the same thing as microfilaments (the terms are interchangeable).

But I can’t resist writing a longer answer! I just want to point out a couple things on those two slides and then show you another diagram to make sure that the structure of the zonula adherens is clear to you.So here’s slide 23 (below). I’ve labeled the actin filaments (or microfilaments). Actin filaments are just tiny little filaments in the cytoplasm that attach to the attachment plaque (which is stuck to the inside of the cell membrane). This drawing doesn’t show the attachment plaque – and it’s also missing the little intercellular cadherin proteins that stick the two cells together. 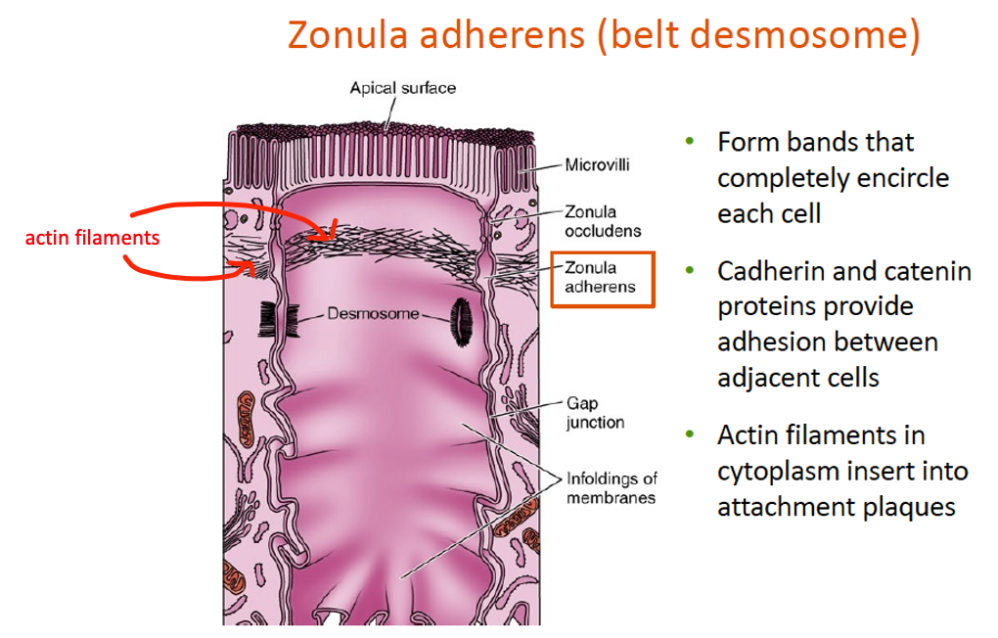 Here’s the portion of slide 19 that you’re referring to: 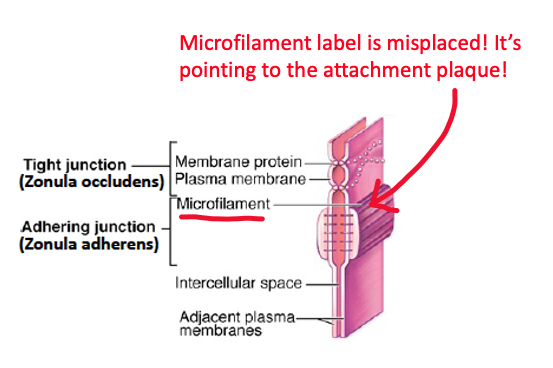 Turns out that the microfilament label is actually pointing to the attachment plaque! And actually, the diagram doesn’t depict any microfilaments – they’ve just been left out! So I drew them in, and labeled the main parts of the zonula adherens just for fun:

Here’s one last diagram just to wrap up this answer. This one was not in our lecture powerpoint – but it’s a good one because it shows a super close-up view of the actin filaments, as well as the cadherin and catenin molecules. I added a label for the attachment plaque, which as you can see here contains mostly just catenin proteins. There are probably some other proteins in the plaque too that are not depicted here, but that’s waayy too detailed for our purposes. 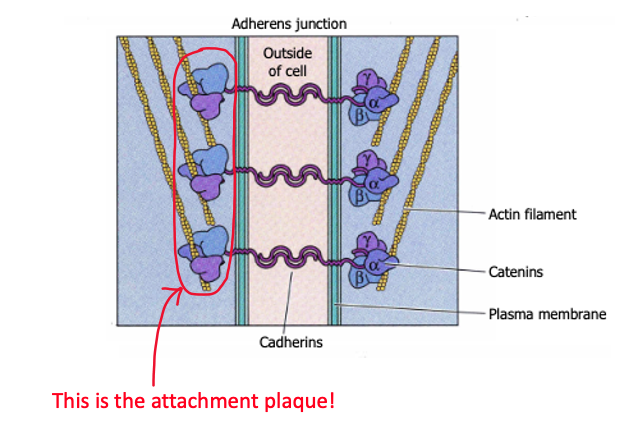 Q. In slide 30 I can see that the orange arrow points toward a hemidesmosome. I also notice three black arrows without labels pointing toward darker spots. The black arrows are pointing to integrins, am I correct?

A. I don’t think so. It’s a bit difficult to see, but I think they’re pointing to the attachment plaque. Let’s just take a look at the parts of the hemidesmosome quick, and then compare it to the EM on slide 30.

Here’s the drawing of all the intercellular junctions that’s on slide 35. I enlarged the hemidesmosome and labeled its parts. You can see how the integrins extend from the attachment plaque through the cell membrane and into the basal lamina: 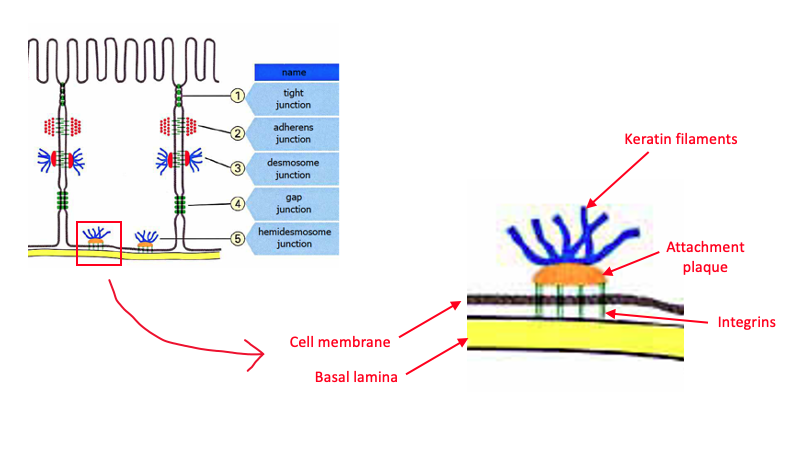 Now let’s take a look at slide 30. I’ve rotated the EM so that it’s oriented in the same way as the above diagram (with the cell on top and the basal lamina on the bottom), and I’ve labeled the main parts of one of the hemidesmosomes:

The black arrows are probably just meant to point out the hemidesmosomes – but if you want to be specific, I think they’re pointing to the attachment plaques.

All posts (newest to oldest)